Anno 2022, as .NET developers, we are spoilt with multiple options for our development environment. Of course, having a choice sparks the debate that my IDE is better than your IDE. I feel that after bring your own device, we are moving to a bring your own IDE workspace. Given the rise of tooling like VS Code DevContainer and GitHub Codespaces, I think more developers will likely opt for such tooling.

Did you know that most of my blogs are written for use in dev containers and are available in GitHub Codespaces?

Each IDE has its perks but also its quirks. Who am I to tell you that tool X is better than Y. If you can work using the tool you prefer, you can be much more productive than a tool because the company said so. It does bring its challenges. For example, if you change a file in your IDE, I don't want it formatted when I open it in my IDE. My version control system will show more changes to a project than happened. Lucky for us, tools like .editorConfig help us a lot to streamline this process. I switch back and forth a lot between VS Code and Visual Studio. My team was working with Rider for a recent customer project. Keeping settings in sync between two IDEs was hard enough. So it made me wonder, is there an equivalent for .editorConfig but used for debug-configuration. I knew that Visual Studio has the concept of a launchSettings.json file. As I discovered, it is possible to make both Rider and VS Code play nice with launchSettings.json. It is by no means perfect, but at least for me, it solves some of the caveats in a bring your own IDE world.

If you were wondering, "Max launchSettings.json has been around for years; why are you writing this article?" The answer to that is straightforward. It bugged me a lot that I had to repeat myself. When searching for how to configure my IDE, I came across the ASP.NET Fundamentals - Environment. It suggests using the VS Code variant of configuration but does not mention that you can reuse your Visual Studio one. Reading that article prompted me to write down what I learned so that someday someone might benefit from it.

Let me begin with a quick recap about launchSettings.json. A launch settings file contains Launch Profiles. A Launch Profile is a kind of configuration that specifies how to run your project. Having these launch profiles allows you to switch between configurations easily. Typical scenarios are switching between Development and Production environments or enabling feature flags. Launch profiles are in the optional Properties\launchSettings.json file. For example, a freshly created console project will not have one, whereas a web API project will define one.

A launch profile has a couple of properties depending on the project type. I will highlight the ones that are relevant to this post.

For our sample application, we will create a new project using the "Console Template" with dotnet new console. Since it is a console, we must create a Properties\launchSettings.json by hand. At a minimum, the file would look like this.

Since we are demoing features of launchSettings.json, it will not be a nice demo if we don't populate it.

The console app will build an IConfiguration and print it to the console. Since I don't feel like adding all my environment variables, I add only the ones prefixed with KAYLUMAH_, kinda like how .NET automatically includes variables prefixed with DOTNET_.

If we run the project now, the output should be:

We also generate a project from the webapi template. We slightly modify it so it contains a second profile, so it looks like this.

Depending on your chosen profile, you see a Swagger UI dashboard.

I could not verify it online, but I think Visual Studio introduced launch settings as part of the first ASP NET Core release. Since launch profiles is a Visual Studio feature, I don't have much to add above the definition I've already given for the specification. One cool thing I like to mention is that running from Visual Studio launchSettings can reference MSBuild variables. That is a pretty handy way to provide something dynamic.

For our console, we see the following selection in Visual Studio:

For our API, we see the following selection in Visual Studio:

As you see, the WebAPI variant shows more than just our launch profiles.

Another aspect of development configuration is the ability to run more projects simultaneously. We can achieve this in Visual Studio by selecting multiple startup projects. As far as I know, this function is user-specific, which would result in every developer repeating information. Luckily there is a handy plugin called SwitchStartUpProject.

We can quickly provide multiple configurations. We can provide a ProfileName for each project that matches one in our launch settings. It is that simple.

As it turns out, launchSettings has been supported in Rider for a long time. They first introduced it in November 2018. As a matter of fact, to use launchSettings inside Rider you don't need to do a thing. Rider automatically detects if your projects are using launchSettings. Not all features are supported, but using profiles of commandName project are. If you did provide MSBuild variable in launchSettings Rider would correctly pass them along. 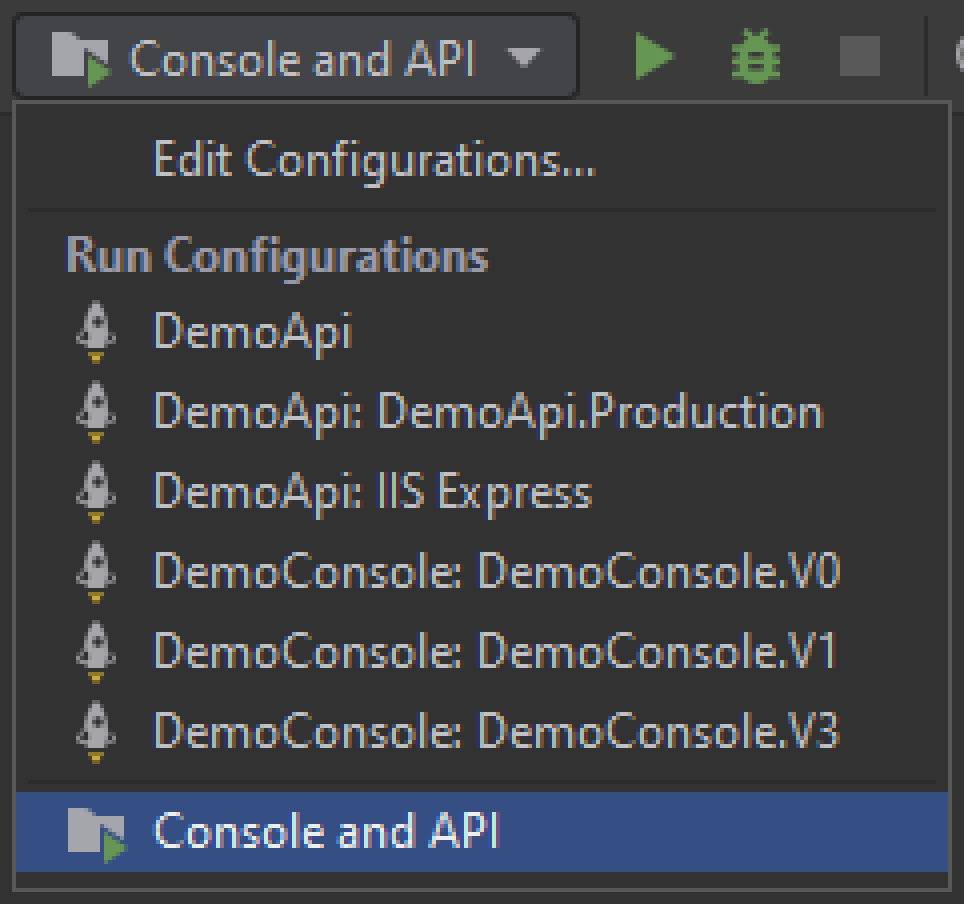 A thing I like about Rider is that I don't need an additional plugin to support multiple start up projects. 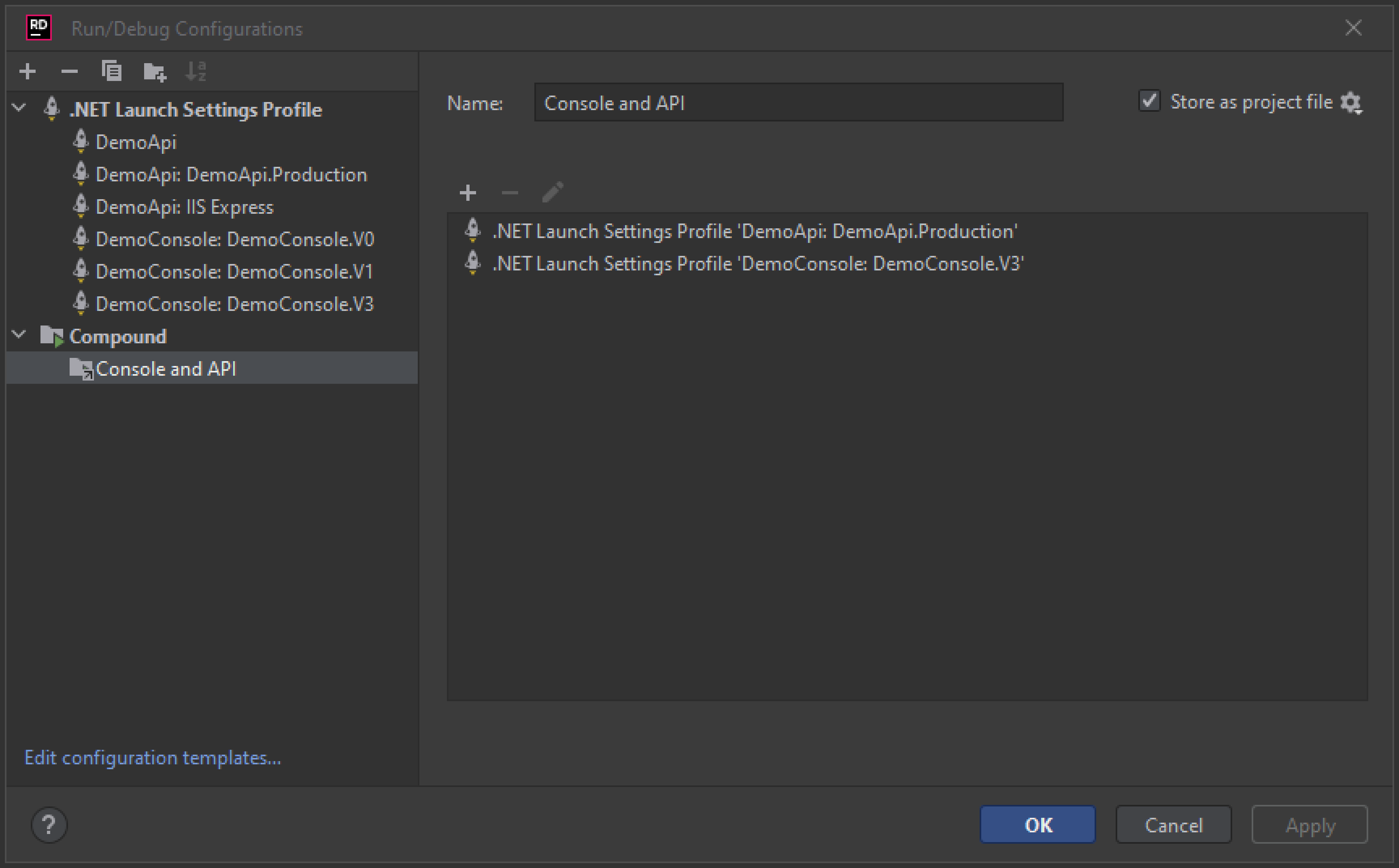 It's important to check Store as project file; otherwise, you won't share it with your team. In this particular example, it will look like this:

Last but not least is VS Code, the reason I started this article. When you open a .NET project in VS Code, you get prompted to create a launch.json file. A launch.json file is very similar to a launchSettings.json. Both options provide the means to choose a project, set command-line arguments and override environment variables. The default launch.json does not pass any additional configuration to the project. So what would be the logical output of our command? The answer might surprise you.

Given the following configuration in launch.json

The output will be:

Like Rider the support for this feature comes with a few restrictions:

Since you can provide arguments and environment variables in both launch.json and launchSettings.json, let's look at an example.

There are a few things that happen:

The default configuration for our web api looks slightly different because it adds support to open the browser after the project starts. Our base URL comes from the launchSettings.json, but the launchUrl gets ignored. You can achieve the same behaviour by updating the generated serverReadyAction with an uriFormat.

Of the three IDEs, VS Code has the easiest way to share compound configurations. Just add the following to your launch.json: 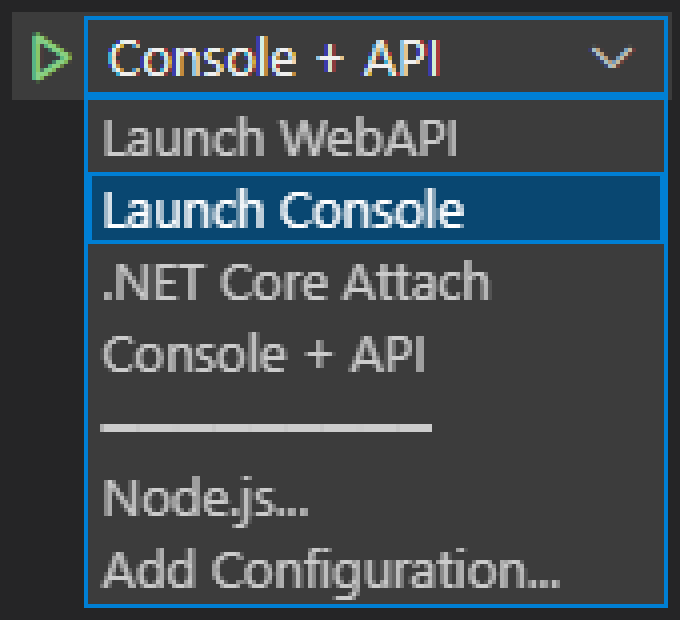 Technically the Dotnet CLI is not an IDE, so consider this a small bonus chapter. I am including the CLI since it also uses launch profiles when running locally.

As it turns out the CLI also defaults to the first project in Properties\launchSettings.json, so in our case DemoConsole.V0. Just like VS Code did. The following example uses a bit of PowerShell to run the CLI.

As we discovered, it's more than likely that you were using launch profiles outside Visual Studio without realising it. I am not sure that not if unspecified, it is a sensible default to take the first one, particularly since someone can change the order of projects. I like that in at least three popular IDEs; we have an easy mechanism for sharing settings.

In the future, I am also hoping for a shared tool for compound configurations. At the very least, managing compound configurations using existing launch profiles is much easier than duplicating arguments and environment variables for each IDE. One last note is that I discovered that MSBuild variable replacement does not appear to be working from VS Code or the CLI. Not sure if that's a bug or by design, but it's important that not every IDE supports all features of the launchSettings.json. As always, if you have any questions, feel free to reach out. Do you have suggestions or alternatives? I would love to hear about them.

The corresponding source code for this article is on GitHub.

See you next time, stay healthy and happy coding to all 🧸!